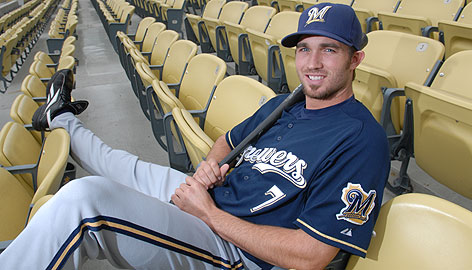 Relaxing...apparently Hardy's main priority
If you can read this post from McCalvy and not hope Hardy is never in a Brewers uniform again I don't know what's wrong with you:

"Maybe I'll come by to pick up my stuff tomorrow," Hardy said. "I'm going to take today to relax a little bit.

"I think these next couple of days are going to be really nice. Just having three days off, that's going to be exactly what I needed. Triple-A, whatever, I'll go down there and do what I'm supposed to do, but I'm pretty excited about getting three days to rest."

Ugh, talk about lack a giveafuck. I would not want this guy anywhere near my ballclub. You get demoted you show some fire or you show you don't care. Pathetic response from a man with a child's name. JJ...weak. Getting demoted is going to be "really nice?" Can you fathom a more pathetic response than that? Christ I hope Melvin can get a competent reliever for this pile of worthless.

"It's a prolonged slump that's lasted four months for me, and I haven't been able to slow it down," Hardy said. "In the past, when I would have a few bad games in a row, I would get a day off to slow the game down and come back strong. It just hasn't happened this year. A couple of days off will be nice, and then I'll go down [to the Minors] and do what I need to do."

I am actually beginning to think that explains Bill Hall's one season of decency.

Hall did gain 50 lbs pretty quickly back then. But reduced power does not seem to be Hall's problem. He hit the shit outta that ball Tuesday night. 12.4 LD% is what needs fixin, and the juice won't fix that.

I have a roid theory on Bill Hall that is pure speculation, but plausible. My memory of that 35 HR season is that he hit a ton of HRs the opposite way.

I suspect that when his power, uhm, "dried up" that he stopped being able to hit balls out with an all-fields approach and started pulling everything. This is what caused the drastic increase in his platoon splits.

I just think the herpes are slowing him down.

I wonder if they put a TV at Silk so Hall can watch the games.

I think everyone was juicing. I don't think it really means anything, I just wanted to insult him a little bit more.

After these comments I doubt he ever cared enough to use steroids.