Please Do Not Trade "Real" Prospects

This team is not a contender, not really. Do not trade Gamel, Salome or Escobar for anything. Trade Hart, Hardy, Parra or anyone else in the farm system if something decent comes along for a player with a contract through 2010. Make no trades for someone who is not club-controlled beyond this season.

I'm not giving up on the Brewers, but I am giving up on the notion that a single player will all of a sudden vault them into contention. Right now the Brewers have a single starter in Gallardo, no consistent performer in the rotation behind him and a four man pen in Stetter, DiFelice, Coffey and Hoffman (you may not remember him, he is the Brewers closer). You can't win with staff consisting of 5 dependable arms.

Even The Onion Hates Jason Kendall

Heh.
Posted by PaulNoonan at 3:39 PM No comments:

I went to Great American Ballpark this weekend to watch the Crew play the Reds. Made it to all three weekend games. My takeaway's:

Kevin Causey was WAAAY out of his league. He did not belong on a major league diamond and he absolutely knew it. The Friday interference call was absurd but not quite as insane as his strike zone on Sunday. He blew a call on a throw-behind on Saturday at first and he cried like a child when any player/coach questioned his calls. He should never have been umpiring a major league baseball game this past weekend, and he should certainly never umpire one going forward. He is God awful at his job and should be relegated to rookie league games where he can be amongst his peers, skill wise.

Other than that, the Brewers do no look good. Zero bench production, massive black holes in the bullpen and bench, and a slumping slugger. Not good at all.

In response, Melvin went out and got Felipe Lopez and optioned Mat Gamel to AAA. I like the first move, hate the second.

Lopez will be a great top of the order bat. He gets on base, is a switch hitter and is a versatile fielder. He's in a contract year (they should immediately work to sign him) so the Moustache got him cheap. Sadly, it also cost the Brewers Mat Gamel.

Now, Gamel isn't exactly a world beater. He's getting on base a somewhat respectable .336 but only slugging .407. Not exactly "how can we afford to lose this guy" stuff, but when you compare the bench alternatives of Bill Hall and Jody Gerut, well I think you can see why I'm not thrilled.

Some potential reasons:
1. Mat Gamel needs every day at-bats.
False. Mat Gamel is 25 years old and has 2000 professional at-bats. More seasoning on has-beens and never-will-be's at AAA will not make him a better player. They might keep him sharp for September, but so would a third base platoon and the obvious role as #1 bat off the bench.

2. Brewers need Gerut for OF backup
False. If they get rid of Gerut they still have Hall or Hart to play center and Catalanatto to play the corner spots. Gerut provides this team absolutely nothing. Melvin took a gamble and lost. Suck it up and move on. Don't worry too much, TGJ will always be shit.

3. Hall costs too much to DFA
False. He costs what he costs, whether you cut him or not. Not cutting him adds another cost, that of a roster spot. The Brewers are no where near deep enough to eat that cost. It is killing them. I witnessed it first hand on Sunday when the Crew sent up the anemic threesome of Kendall, Catalanatto and Counsell to go quietly into that beautiful afternoon. Three up, three very quickly down, game over. Brewers lose a Gallardo start against a divisional opponent on a day they could hardly afford it. This can't keep happening. Zero options to go to on the bench mean it will, and it's unacceptable.

Lastly...why McClung in that spot yesterday? Hindsight is 20/20 and all but man oh man, it's the eighth inning, go to one of your studs like Coffey, DeFelice or Villanueva. At least they hadn't been recently rocked by the Reds lineup.
Posted by E.S.K. at 11:42 AM 4 comments: 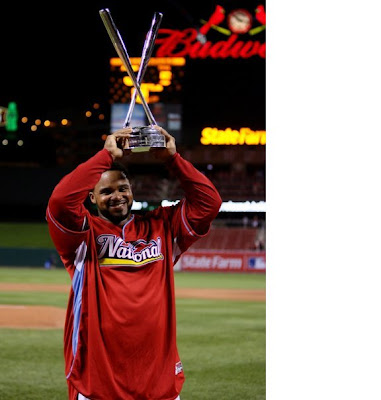 Bring on the All Star Break

This team is spent.

I'm glad Macha let Villanueva give up two runs and load the bases before getting the pen going. Brilliant strategy.
Posted by E.S.K. at 10:13 PM 1 comment:

Another Thursday day game, another unproductive afternoon. Joel Pineiro (6-9, 3.39) takes the mound for the Cards, while black sheep Manny Parra (3-8, 7.52) makes his return to the bigs for the Crew. Mike Rivera is catching for him. I smell a perfect game. Here are the line-ups:

Who Would You Trade For Roy Halladay?

Keep in mind that Roy is signed through next year, not just this year.

I think Roy Halladay is on the short list of the best pitchers in baseball. On top of that, being traded from the strongest division in the stronger league to the relatively putrid NL central would make Halladay that much better.

If I ran the Brewers and we were a serious player for Halladay, the only players I would not trade are as follows:

And that's it. I think I'd be willing to part with anyone else in some combination, or alone. Here are some offers I might make, that I think might be enough:

I'd prefer to deal Hardy as he will soon get expensive and while I like Hardy and think he's a very valuable player, there is no point in having Escobar in the system if Hardy sticks around forever. We also have two decent catching prospects, and I'd be willing to part with one of them, and Parra, I suspect, will have problems as long as he's in Milwaukee

Hart is overvalued by some. I'm not sure if the Jays are part of that group, but they very well might be. Hart has some (sort of) gaudy counting stats, awards, and blazing speed, all of which make him look better on paper than he is in real life. Right field is quite possibly the eventual landing place of Mat Gamel anyway, and with Casey McGehee's recent greatness, it would allow the rookie to stick. And yes, I'm fine with just sticking him in the outfield with no practice.

3. McGehee, and some combination of the above.

It probably makes sense to sell high on Casey if it comes down to that. This is not meant as a knock on the guy; he's been fantastic. I just don't think he'll remain fantastic.

Players I would try hard to include:

I'm not sure if you're allowed to trade players on the DL or on the suspension list, but I also have no problem with moving Weeks or Jeffress.

Roy Halladay is every bit as good as CC Sabathia, with the bonus that you probably get him for another year (or failing that, prospects from trading him after this year). The Brewers have enough pieces to land him, that's for sure. As for finances, my rough estimate puts Halladay at about $7 million for the rest of 2009, with another $15.75 million due next year. He's certainly not cheap, and I don't know if the club has the stomach to add that much payroll given current economic conditions, but the hit this year isn't too bad, and given what they offered Sabathia in the offseason, it seems like they should be able to afford him.

There is another reason to try to make this deal happen as well. It is very possible that the Cardinals will be pursuing this deal too. (And perhaps the Cubs, but who knows with their ownership and farm system in the respective states that they are in). If the Cardinals were to land Halladay, and could throw out a rotation of:

That would not be good.

So what do you think? And what would you give up?
Posted by PaulNoonan at 9:52 AM 4 comments:

It’s almost game time, and we’ve got several members of the JV squad in the game today, including Mat Gamel and Jody Gerut. I have yet to see Jody Gerut hit a ball out of the infield, but I’m sure it will happen for him soon.

Anyway, they will also have the bat of Yovani Gallardo in the lineup so that should compensate a bit. The Brewers stole one from Johan yesterday behind a solid outing from Mike Boo-urns. If Yo can just be Yo, the Brewers should pull off the sweep, all while the Cubs are floundering against the Pirates and the Cardinals are struggling mightily against the Giants.

The Crew visits my neighborhood for a 4-game set with the Cubbies this weekend, and the good news is that the Cubs will not have Aramis Ramirez back until Monday. Timing is everything.

Here’s what we’re looking at:

This site is good for killing 20 minutes or so.
Posted by DannyNoonan at 8:51 AM No comments:

Brewers Mess With The Johan

I like games like this. When I see javascript:void(0)"Johan Santana v. Mike Burns" I mentally chalk that game up as a loss. Winning said game is extra fun. Now I feel like I can credit this win against some future loss where the matchup is hugely in our favor.

We have a day game today, which means we'll have a day game open thread 'round noon. Assuming you're stuck in the office like I am and not enjoying an extended holiday weekend, it should be fun.
Posted by PaulNoonan at 8:24 AM No comments: