Why the NFL’s statement is completely wrong

Simultaneous Catch. If a pass is caught simultaneously by two eligible opponents, and both players retain it, the ball belongs to the passers. It is not a simultaneous catch if a player gains control first and an opponent subsequently gains joint control. If the ball is muffed after simultaneous touching by two such players, all the players of the passing team become eligible to catch the loose ball.

What you should be asking yourself is what it means to have “control.” Control is not possession. In fact, if you look at Rule 8, Section 1, Article 3, Item 4*, you’ll see “control” discussed in the context of “going to the ground (the Bert Emanuel rule). Control is necessary to establish possession, but control is NOT possession. Control is also discussed in sideline catches, going to the ground, and in the description of what constitutes a completed pass itself. (Rule 8, Article 3 (a))

This is important because one might argue (still incorrectly, I would say) that Tate and Jennings had “simultaneous possession.” What I mean by that is that both had control of the ball, touched two feet (or a body part) in bounds, and maintained control long enough to perform an act common to the game. That’s possession. But that’s not the rule for determining that a simultaneous catch was made. That rule, again, says:

“It is not a simultaneous catch if a player gains control first and an opponent subsequently gains joint control.” 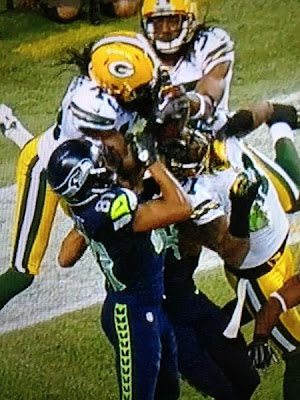 Jennings had control first, hence no simultaneous catch, hence no touchdown. The NFL is spewing utter bullshit with this statement, and all you need to do is apply the rule properly to see it. They provided us with the rule and then pissed all over it.

*Ball Touches Ground. If the ball touches the ground after the player secures control of it, it is a catch, provided that the player continues to maintain control.
Posted by PaulNoonan at 12:25 PM 157 comments: